It seems as though our nations has an epic crisis on our hands. Suddenly our teachers have been declared ineffective and it appears a new  education system  is the only thing that can save our nation from a future of drop outs. Corporate leaders are rushing to save our schools from the demons of public education.

The cry of the nation seems to be that new initiatives will save us. Testing will screen out those lousy teachers and schools, and our nation will embark on a new direction.

The Mission Statement of the Common Core initiative states:

The standards are designed to be robust and relevant to the real world, reflecting the knowledge and skills that our young people need for success in college and careers. With American students fully prepared for the future, our communities will be best positioned to compete successfully in the global economy.”

“Everyone I talk to really shares my sense of urgency that we have to do better for our children. We’re fighting for our country here.”

Even President Obama has said,

“This is a problem we can’t afford to accept or ignore… “The stakes are too high – for our children, for our economy, for our country. It’s time for all of us to come together – parents and students, principals and teachers, business leaders and elected officials – to end America’s dropout crisis.”

How can we sit back? Something needs to be done. It’s our new national emergency! Can’t you sense the urgency?

Hold on! Not so fast!

Let’s take a look at the real data. (Click on the charts to enlarge)

First take a look at our nations drop out rates. They have steadily declined over the last 30 years. 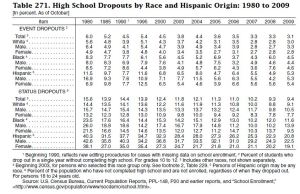 We’ve been told the Common Core initiative will make our students college ready.  Take a look at the college enrollment rates since 1959, We are at an  historical high. National emergency?? 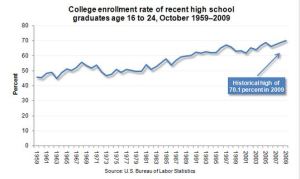 Those who are proclaiming that the sky is falling should also take a look at this data. 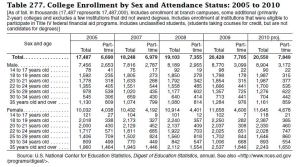 How are our students doing once they enroll in college? The naysayers seemed concerned with this as well. So, take a look at this. Notice the number of degrees earned has dramatically risen. 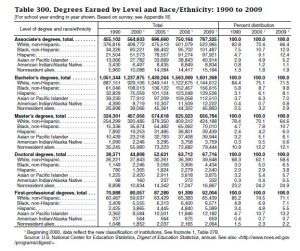 and this.. Doctoral degrees have doubled. 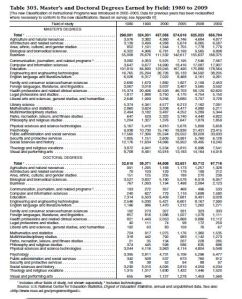 The rhetoric has an agenda.

The agenda is to take over public education. There’s billions to be made. Our military now fights wars with private contractors making billions, our roads and bridges are slowly being sold off to corporations, our mass transit systems are being taken over, and more and more of our public assets are being turned over for profit. Our schools are next.

Schools across the country are being shut down, and then magically reopened as charters. Textbook publishers are singing for joy. People like Joel Klein and Michelle Rhee have traded in their work as public servants for the lure of profits. Corporate leaders see  the future, they see profits.

You can’t privatize the military unless you invent a war that the country doesn’t want to sacrifice for. Then you have the perfect plan. We saw Blackwater, Halliburton and others benefit from a 10 year war, no one really supports.

Now we see, Pearson, McGraw Hill and other publishers, joining the ranks of Rupert Murdoch, Joel Klein, Michelle Rhee, Bill Gates and others . Charter schools are slowly taking over public schools, with many having dismal results,

Teachers are being labeled as the problem. States are cutting school funding, tests are being designed that will “prove’ the national emergency really does exist.

It’s time for us to create our own rhetoric.  After all, we all found out last week that the pineapple had no sleeves.

The Fruitcake and the Big Banana

(A tale inspired by the Pineapple and the Hare)

In recent times, politicians all across the country, thought they knew a way to get everyone to speak English just like them.  One day a fruitcake, to appease those politicians, challenged all teachers in the country to a race to the top.

(I forgot to mention, fruitcakes have been dictating education policy lately.)

I should mention, that teachers all across the country have graduate degrees and are always perfecting their craft by utilizing professional development. So they seemed surprised by the challenge.

“Mr. Fruitcake, why are you challenging us teachers to a race to the top?”  the teachers asked. “ Are you kidding, after the NCLB fiasco your predecessor thrust upon us?”

“Sure,” said the fruitcake. “ The big banana approved my plan to challenge you all.” He said, “Yes you can.”

“You aren’t even in a classroom, you don’t understand all the challenges!” the teachers said. “ You’re a Fruitcake!”

All the educators across the country thought it was strange that the Fruitcake would want to have a race to the top. You see teachers all over the country supported the big banana and his ideas, except this one.

“ The fruitcake must have some sort of hidden agenda,” the skeptical professor said.

“Fruitcakes are full of mysterious green things that have hidden meanings, ”the Sly Fox broadcasted.

“ Well you know, if a fruitcake wants teachers to race to the top, it must mean there is a really good reason.” the Peacock with the fancy right wing said. “ After all, we’ve heard that they haven’t been to the top for a very long time.” “The fruitcake must know what he’s doing.”

Everyone all across the country, well not quite everyone, started to believe that the fruitcake knew what he was doing. Even the big banana thought the race to the top was achievable. So all many of those with right and left wings started to proclaim that they believed in the fruitcakes grand plan.

When the race began, the teachers resigned to their fate, attended meetings in anticipation of readying their small groups, to sprint to the top. They coached, drilled and practiced with their teams every available minute. Some teams even gave up some luxuries such as meaningful discussions, exploring their imaginations, and yes dreaming. All in an effort to race to the top.

Now the Big Banana saw what was happening in the country, So he took to the air and proclaimed that teachers should be allowed to have meaningful discussions, explore the imaginations, and yes let their teams dream.  Just as the teachers began to jump for joy, they realized the Big Banana didn’t call the race to the top off. The Fruitcake’s cohorts all across the country, were still constructing challenges , obstacles and hazards for the race. So the teachers had no choice but to lead their teams to the starting line.

There they were, the Sly Fox, belittling the teachers, the Fruitcake promising rewards at the top and punishment for those who don’t make it, the bystanders looking confused and some not seeing evil, hearing no evil, and saying no evil, standing by. The skeptical professor went from one end of the line to the other, trying to convince the masses that the race to the top is a trick, because there was no top.

Then the race began….

The teachers took off, as fast as they could. Working earnestly they approached their first obstacle. Strangely enough it was a pineapple.

One thing I do know, teachers all across the country overcome pineapples, fruitcakes, and those who try to turn them into scapegoats every day. Big bananas always start off green and either turn deliciously ripe or just plain rotten. Teachers want the big banana to ripen beautifully but if it turns rotten, no matter how much they can, even if they want to, they won’t, if it turns rotten.

Moral: Be careful where you race to

Let the games begin. Spring break ends on Monday and New York State, in their great wisdom, has elected to have their high stakes testing nonsense begin on Tuesday. Ignoring all the research about “vacation slide’ New York has elected to have students undergo a series of grueling tests immediately upon returning from Spring Break. Since this also kicks off New York State’s new teacher evaluation fiasco , commonly known as APPR, some think this scheduling decision is a deliberate attempt to skew scores downward.  I tend to agree.

When reviewing the schedule for this year’s battery, notice very little time for scoring. Scoring for the ELA assessments actually can overlap the period set aside for the Math assessments. This stretches resources and forces many districts to attempt to score both assessments on a single day. Most districts have no choice but to give students a day off while teachers struggle to score. Considering this year’s tests are considerably longer most districts will struggle to complete this task in one day.

The state has indicated that this should not be an issue and released a chart showing how long it should take to score each item.  In addition ,allotting 36 seconds to review a student’s math calculation and method is insane. We all should be concerned about accurate scoring. Rushing to score high stakes assessments could also skew scores downward. Again, I feel this is a deliberate attempt to skew scores downward.

Consider this, we’ve been told there will be questions that have never been released before. ? Another method to skew test downward.

The facts don’t lie. These tests have been moved up in the calendar by almost 1 month, forcing teachers to condense curriculum, they included expanded questions and content,  and  rushed scoring, all designed to skew scores downward.

So let the games begin. Teachers are under attack, evaluations will be used to circumvent tenure, APPR is a mess, and our scores will become fodder for all those willing to take aim at public education.

And then we see headlines like this. Making us all wonder, who is on our team?